The news broke Sunday evening, May 1st, 2011. President Obama was going to make a statement on national television later that night. The internet was abuzz with theories of what the President would say at such a late hour on a Sunday. It wasn't long before the wide speculation centered on one man: Osama bin Laden. The consensus was he was either captured or dead. Soon, a leak confirmed that the President would announce that bin Laden had been killed by special forces.

Late that night, President Obama addressed the nation, and lied. Here is the relevant portion the speech:

"Today, at my direction, the United States launched a targeted operation against that compound in Abbottabad, Pakistan. A small team of Americans carried out the operation with extraordinary courage and capability. No Americans were harmed. They took care to avoid civilian casualties. After a firefight, they killed Osama bin Laden and took custody of his body."
Of course, at the time, we didn't know he was lying and maybe even he didn't know he was lying, for over the course of forty-eight hours this story would change dramatically.

By the time the President gave his address, the press had reported that bin Laden had been buried at sea, the Arabian Sea to be precise.  Also, Americans became aware of the name of the special forces team that had carried out the mission; the elite Navy SEALS Team 6. This was the top team, their missions so secret that some records didn't exist. They were lauded in the mainstream media (MSM) as heroes yet their identities would probably never be known. It made for a great story and a great sense of closure for Americans, those who still believed that Osama bin Laden was even alive, as they paraded in the streets waving flags.
The "official" story propagated by the White House and the Pentagon, that Team 6 had encountered a firefight and that an armed bin Laden used his own wife as a shield, began to unravel within a matter of hours. Pakistani Urdu TV channel Geo News reported that Pakistani intelligence sources were quoted as saying, "at about 1:20 a.m. local time a Pakistani helicopter was shot down by unknown people in the Sikandarabad area of Abbotabad. The Pakistani forces launched a search operation in the nearby area and encountered with a group of unknown armed people. A fire exchange followed between the two sides. When the fire exchange ended, the Pakistani forces arrested some Arab women and kids as well some other armed people who later confessed to the Pakistani forces they were with Osama Bin laden when the fire was exchanged and Bin Laden was killed in the firing. Local media reported that after the dead body of Bin Laden was recovered, two U.S. helicopters flew to the site and carried away the dead body of Bin Laden." Clearly, these intelligence sources weren't briefed about Obama's statement.

Now there were two versions of what happened.


U.S. VERSION:
4 Chinook and Blackhawk helicopters dropped 24 men on the compound. One helicopter suffered a “hard landing” inside the compound after experiencing a mechanical failure and had to be destroyed on the site, according to one defense official. After encountering a heavy firefight, the troops found bin Laden in an upstairs room. He was armed and using his wife as a shield, but the troops killed him and his wife.

PAKISTAN VERSION:
At about 1:20 a.m. local time a Pakistani helicopter was shot down by unknown people in the Sikandarabad area of Abbotabad. The Pakistani forces launched a search operation in the nearby area and encountered with a group of unknown armed people. A fire exchange followed between the two sides. When the fire exchange ended, the Pakistani forces arrested some Arab women and kids as well some other armed people who later confessed to the Pakistani forces they were with Osama Bin laden when the fire was exchanged and Bin Laden was killed in the firing. Local media reported that after the dead body of Bin Laden was recovered, two U.S. helicopter flew to the site and carried away the dead body of Bin Laden.


Then the Pentagon released a second version of what happened. In the latest version, Team 6 encountered gunfire from the roof of bin Laden's compound and killed the gunmen. Once inside the compound, the team was challenged by two armed men who were both killed and caught in the crossfire was one of bin Laden's wives. Once the team was upstairs they found not an armed bin Laden but an unarmed bin Laden who did not use his wife as a shield. This wife was now not killed but injured when she rushed the team which then took out bin Laden with a bullet to the chest and a bullet to the head.


By this time a series of fake photographs of a dead Osama began floating around the internet. Almost like a trial balloon, to see if the fakery would be noticed, and it was. Also on the internet were apparently real photographs of Osama's dead bodyguards and their supposed weapons. Clearly, this photograph shows a gun all right, a water gun. 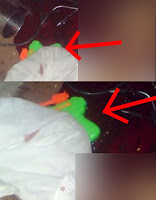 Pakistani officials then began leaking the interview they conducted with bin Laden's twelve year old daughter. She, "told the investigators that commandos had captured her father alive and that they shot him to death in front of the family ten minutes after they located him."

Apparently this was enough because the Pentagon released a third version of the story. Besides bin Laden, four others were killed, one woman and three men. Now there was no firefight, just resistance in the compound yard by one armed man. As NBC, almost incredulously, reported, "(f)our of the five people shot to death in the operation that killed Osama bin Laden, including the al-Qaida leader himself, were unarmed and never fired a shot, U.S. officials told NBC News on Wednesday — an account that differs markedly from the Obama administration's original claims that the Navy SEALs came under heavy small-arms fire in a prolonged firefight."

That was pretty much the end of it as far as the MSM was concerned, except for the occasional fear story of revenge attacks. Then came August 6th, 2011. If it was a strange coincidence that the Osama raid was carried out on the 10th anniversary of Bush's infamous "Mission Accomplished" speech, then it was a very strange coincidence that a successful attack by the Taliban against a Chinook helicopter in Afghanistan took place on the 66th anniversary of the atomic bombing of Hiroshima. Even stranger, that some of the troops killed in the helicopter attack were part of Team 6 that carried out the Osama raid!

At least, that was the first official version of the attack. A Taliban soldier had fired a rocket-propelled grenade at the Chinook, which exploded and crashed. The 31 lives lost represented the greatest single day loss of Americans in the entire ten year war. These parts of the story have remained essentially the same, what keeps changing is whether or not the 21 Navy SEALS lost in the attack were part of the Osama raid. One day they are, the next day they are not, the next day maybe some of them are. How that fact "officially" winds up is anyone's guess. What is interesting is that the identity of the SEALS are being publicly released.

Whatever the reason for this particular shell game being played by [insert favorite hyphenated-complex] at this time, like with all other matters similar to this, one overriding fact must not be forgotten: once again, brave troops of our country were used and their use in this case resulted in their deaths.

SECOND UPDATE - 3/18/12
Here is a link to a CBS News article that explains how the US government has changed its story once again! "The Pentagon told the AP this month it could not locate any photographs or video taken during the raid or showing bin Laden's body. The Pentagon also said it could not find any images of bin Laden's body on the Navy aircraft carrier where the al-Qaida leader's body was taken."

THIRD UPDATE - 8/25/12
One of the alleged Navy Seals who "killed" Osama has written a book, under a pen name, which apparently surprised the U.S. Government and caused the folks at Fox News to out the author. This all seems to be playing out as a strange turf war within the CIA about leaking information concerning the so-called death and another excuse to vilify Fox News. In other words, more smoke and mirrors in an attempt to cover up this fabricated story about Osama's "death".

FOURTH UPDATE - 3/30/13
So how many of these guys from Navy Seal Team 6 has to die before it is no longer a coincidence?

FIFTH UPDATE - 2/12/14
Reports have now surfaced that an order went out to destroy any photos or videos of bin-Laden's corpse.