HERE IT IS IN BLACK AND WHITE. You can read this with your own eyes. Exit Polling clearly shows that Election Fraud is alive and well in 2016 and favors Hillary Clinton. Not a conspiracy theory. These are facts, my friends. Pesky facts that Hillary supporters will not defend because they live in a state of denial. There's a river that runs through Arkansas and it's name is Denial, as the saying goes.

Exit Polling is so reliable that it used to make sure other countries are holding fair elections and not engaging in election fraud. Any deviation from the Margin of Error (MoE) means only one thing: Election Fraud. The elections in States marked in RED clearly show it happened, a lot. Yet, the Mainstream Media is silent on this (because our elections are fair and square - we're not some third world banana republic ya know!) and they have even gone as far as to stop reporting exit polls since MAY 6TH!


Without Exit Polls in the remaining 9 elections, it will be very difficult to see how much more ELECTION FRAUD the Goldman Sachs camp has up it's sleeves. This is why she's running around claiming to have 'already won'. Also, this explains her flip-flop on a promise to debate Bernie Sanders in California before that State's primary. Welcome to Democracy, my friends, welcome to Democracy. 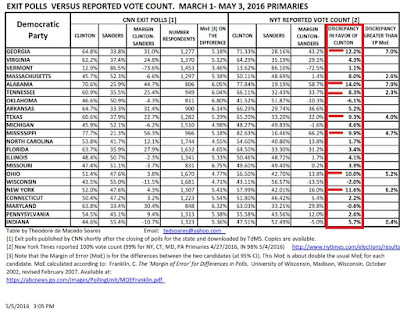