THE JFK CONSPIRACY: The Proof Is In The Warren Report

I believe it is safe to say that no one will ever be arrested, let alone tried and convicted, of deed or complicity, in the assassination of John F. Kennedy on November 22nd, 1963. Mainly because almost all of them are dead. It is unlikely that a notarized document from Oswald or a member of the military/industrial complex exclaiming, "Yes, I shot that son of bitch Kennedy dead!" will suddenly be discovered. Yet, even a cursory examination of the available evidence reveals that a coup d'état was accomplished in America that day.

It is easy to forget, given the distance in time of almost 50 years, that almost every conspiracy theory began with the publication of the very document created to refute conspiracy: The Warren Report.
More importantly, even though the Report's conclusion was that a lone assassin fired three shots from the sixth floor of the Texas School Book Depository building, the evidence included in the Report completely refutes its own conclusion!

What I would like to do is focus on three examples of evidence which explicitly show that the official version is incorrect and hence a conspiracy in the truest sense of the word did exist. With this knowledge we can see that a coup did happen and we as a people and as a nation have suffered from the repercussions that reverberate to this day. To begin, let us look at the well worn official version of the assassination in Dallas, Texas. President Kennedy, his wife Jackie, Texas Governor John Connally and his wife Nellie were riding in an open air convertible as part of a motorcade through downtown Dallas.

After the motorcade turned on Elm Street, in front of the Texas School Book Depository building, three shots from a high powered rifle rang out. One bullet missed, one hit Kennedy in the back, passed through his throat and caused several wounds to Connally, the infamous magic bullet theory, and the final bullet struck the President in the head. A short time later, the lone assassin, Lee Harvey Oswald was arrested by Dallas Police. Two days later, while being transferred from the city jail to the county jail, Oswald was shot dead by nightclub owner Jack Ruby. All, of course, very cut and dried.

The Warren Report was the result of a ten month investigation instigated by the new President, Lyndon Johnson. Headed by Supreme Court Chief Justice, Earl Warren, it became known as the Warren Commission. The report canonized the three shots fired from one rifle, from one lone nut, from the sixth floor of the Depository and the magic bullet theory that one of those bullets transited Kennedy and then caused five addition wounds to Connally. Since the publication of the Report the conspiracy theories surrounding the assassination have become extraordinarily numerous. In fact, the Oliver Stone film, JFK (1991), is a virtual compendium of conspiracy theories. It is not my aim with this essay to refute or embrace any of the many plots, counter-plots and theories. I present here three examples, straight from the Warren Report, that prove a conspiracy and hence, a coup against representative government.

1) MORE THAN ONE LOCATION FOR THE FIRST SHOTS
The first example I'd like to focus on is the photographic evidence and testimony of Secret Service agents John Ready and Paul Landis in regards to the first shot. Or shots, as some witnesses claim to have heard. In the official version, Oswald is shooting with a rifle from the sixth floor of the Texas School Book Depository. In the photograph below, taken by John Altgens and published in the Warren Report, we can plainly see that the Secret Service agents are not looking UP but AT the Depository building behind them and to their right. Agents Ready and Landis are reacting to the first shot(s). Agent Clint Hill, who was actually Jackie Kennedy's personal secret service agent, seen on the front of the running board on the right side of the photograph, seems to be reacting to Kennedy clutching his throat and splaying his elbows. The photo was taken approximately 3 seconds after the first shot(s) and approximately matches the Zapruder film frame #256 seen below.
In his testimony before the Warren Commission, Agent Landis recalled that he "heard what sounded like a report of a high powered rifle from behind me, over my right shoulder" (Vol. 18 of Warren Report, pg. 754). However, there were numerous witnesses who saw a man with a rifle on the sixth floor of the Depository. Yet, none of the witnesses were able to pick Oswald out of a line-up as the man they saw in the window. Regardless, here is evidence, produced by the Warren Report itself, which shows at least two shots were fired from behind the motorcade! One was at or near street level judging by the Secret Service agents' own testimony and photographed reaction and also by the eyewitnesses who saw a gunman on the sixth floor of the Texas School Book Depository.

2) THE BULLET THAT COULDN'T BE FIRED
Within the evidence included in the Warren Report are photographs of the three spent shells found by Dallas Police on the floor near the assassin's window on the sixth floor of the Depository. All three bear chamber marks from a rifle, perhaps from the Mannlicher-Carcano also found by the police on the sixth floor. The qualification on whether "Oswald's rifle" fired all three of the shells found on the floor comes from Warren Exhibit #2968, a letter from FBI Director J. Edgar Hoover to Warren Commission counsel J. Lee Rankin. Contained in the letter is this relevant passage, "...the extractor and ejector marks on C6 [Commission Exhibit #543] as well as on C7 [CE#544], C8 [CE#545] and C38 [a test round fired by the FBI] , did not possess sufficient characteristics for identifying the weapon which produced them." Yipes! Additionally, photographs of CE#543, one of the shells found on the sixth floor, show a pronounced dent on the lip. This dent was first seen in Josiah Thompson's 1967 book, Six Seconds In Dallas. 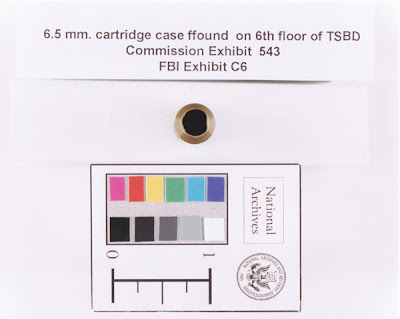 As you can see, this shell could not have held a bullet on November 22nd, 1963, therefore it was a plant. The evidence? Why, once again, from the Warren Report. A series of tests were performed using the Mannlicher-Carcano rifle found in the Depository and one of those included dry firing empty shells. It was found that when the bolt was operated to eject the empty shell, a dent in the lip was produced (CE#557A). There goes the three shots from the sixth floor Warren Report conclusion right out the window, as it were.

3) THE BLOOD IS BACK & TO THE LEFT
Probably no other aspect of the assassination has caused more unnecessary confusion than the head wounds infliction upon President Kennedy. Many of the doctors at Parkland Hospital, where Kennedy was rushed, described a large avulsive (exploded) wound in the back of the head. The Warren Report itself includes testimony from doctors and laymen describing a large wound on the right side of the head and on the back of the head. The Warren Report buttressed their single assassin theory by including the autopsy results and testimony from the autopsy doctors. The autopsy showed that Kennedy was struck once in the back (the lower neck) and once in the back of the head. It concluded that the throat wound was of exit leading to the magic bullet theory. Like I said, confusion.

Those arguing against conspiracy, point to one of the autopsy photographs (which none of the Commission members ever viewed) showing the back of the President's head. No damage is seen on the back of the head except what appears to be a bullet entrance wound. But, it can be seen in the photo that the doctors are holding up the scalp with their fingers! Those arguing in favor of conspiracy point to the head wound descriptions of the doctors at Parkland and laymen who saw the President after he was hit. They also point to the famous Zapruder 8mm home movie which apparently shows Kennedy recoiling back and to his left from the shot(s) to his head. How can these two arguments be reconciled?

Back to the movie, JFK. In it we see the crusading District Attorney giving his summary to the jury during the Claw Shaw trial. While referring to the Zapruder film, he says we can see Kennedy's head and body go "back and to the left", a refrain he repeats several times. In the last of my three examples, I would like to point out that researchers on both sides of the argument have overlooked important pieces of evidence included in the Warren Report. Instead of looking at the head "go back and to the left", we should be looking at where the blood actually went. Not by looking at grainy film stills, but by looking at the photographs of the presidential car and Kennedy's coat and shirt. It is clear that his brains and blood also went back and to the left. Thus, a shot fired from at least the front right of Kennedy and thus a conspiracy. 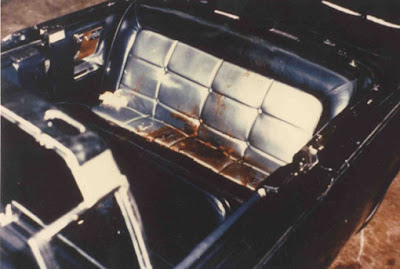 Give it up, Rod. Kennedys die, Graysons and Kuciniches are marginalized, and Bushes and Cheneys thrive.

It's the way of a dysfunctional, ass-backward Universe in which Evil is Good and Good is Evil...remember this Cole Porter song?

Excellent post, Rod. You have made a very sound argument for conspiracy with references to back it up from the WR itself. May I recommend to you and your readers my blog on the JFK assassination at www.fjk50d.blogspot.com. Thanks.

Thanks, John. I've bookmarked your blog for further reading.

That's rose pedals NOT brain matter in the back seat of the car.

If only it were rose pedals.

He is right.... rose pedals.
There was a bundle of roses between the two of them

Yes, there were roses (given to Jackie) and you can see a few in the photo, but the rest is blood and brain matter.